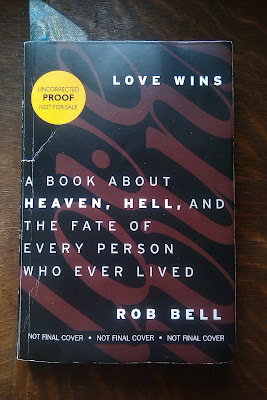 1. Yes I have the book so quit asking (photo provided)

2. No the book is NOT for sale

3. Saying mean things about my family or myself will not get your comments posted nor will it stop this book from getting published (and adding "I mean this in Love" does not make your post Christ like).

4.The book is biblically based and includes EVERY reference to Hell in the bible. So please stop trying to post anonymous references that only include a bible verse describing Hell. I have read them before and they are all included in the book.

5. As you can see from the picture this is an uncorrected proof. I find it important to say verbatim what it says, so I am not going to correct its grammar, thats the job of the editor who I'm sure will correct it before you buy it.

OK so with all that out of the way I’m not sure I want to go too in-depth about the book because I think it is important for folks to explore it for themselves. As you would expect the book, much like the video, is full of questions (more so than answers). I am fighting the urge to do a more extensive review before it is published because I think people should read it and wrestle with the questions themselves.

When I say he lands on solid orthodox ground I don't mean this has been some sort of bait and switch and he ends up just agreeing with the neo-Calvinists (As Julie Clawson points out there is a sometimes huge difference in evangelical orthodoxy and Christian orthodoxy). What I mean is he always uses The Bible as his reference point, He does not end up saying Jesus was a space alien or some other ridiculous thing. To put it more simply I can not find anything in this book that contradicts the Nicene Creed (though again I'm sure there are scores of folks who will disagree).

In describing the history of the Christian church and what Christians have believed over time he says:

"...however you answer these questions, there is a good chance you can find a Christian or group of Christians somewhere who answer in a similar way. It is a wide stream we are swimming in."

I will say that in the same way He writes about angels and animals in “Sex God” (speaking about abstinence and self indulgence) he explores the issues of Heaven and Hell, Judgement and Eternity. He avoids buying into the traditional narrow views on both sides and delves into scripture, inviting the reader to question, explore, and make their own judgments.
Here are a couple of other reviews by others who have also read the book (but again don't take our word for it read it yourself):

“In the current religious climate in America, it isn’t easy to develop an imagination, a thoroughly biblical imagination, that takes in the comprehensive and eternal work of Christ in all people and all circumstances in love and for salvation. Rob Bell goes a long way in helping us acquire just such an imagination. Love Wins accomplishes this without a trace of soft sentimentality and without compromising an inch of evangelical conviction in its proclamation of the good news that is most truly for all.” – Eugene H. Peterson, Professor Emeritus of Spiritual Theology, Regent College, and author of The Message and The Pastor

“Love Wins is a bold, prophetic and poetic masterpiece. I don’t know any writer who expresses the inexpressible love of God as powerfully and as beautifully as Rob Bell! Many will disagree with some of Rob’s perspectives, but no one who seriously engages this book will put it down unchanged. A ‘must read’ book!” – Greg Boyd, senior pastor at Woodland Hills Church and author of The Myth of a Christian Nation

A number years ago I read a blurb from a well known preacher who quoted a book called Velvet Elvis and explained why the author is a heretic. This well known preacher explained that the author said directly that he did not believe in the virgin birth. He even provided a chapter and page number.
I took this well known preacher for his word and decided to not read the book. Then several months later one of my mentors suggested I should read books by people who I disagreed with as it would help me sharpen my understanding of what I believed. So of course I picked up Velvet Elvis straight away.
I found that what the well known preacher said was true the author DID say exactly what was claimed on the exact page where he claimed it was. HOWEVER it was used in an example of doubt, and two pages later the author said he fully affirmed the virgin birth and orthodox Christianity!
This left me in a very interesting spot. This well known preacher had ether prejudged the book and author with out reading the book (sloppy at best) or he had purposely lied and used the quote out of context to discredit the author (dishonest and self serving at worst).
I have gone on to read every thing the author has ever published, watch his thought provoking videos, and listen to his weekly sermons . This author has had a profound effect on my life and my ministry.
It would seem the same folks are at it again. In a blog post and a series of tweets they are using social media to attempt to discredit the authors latest book, and most people are ignorantly copying and reposting what they have to say. Here are a few of the comments that people have copied and re-tweeted over and over again:

The sad thing here is that NONE of these folks have actually read the new book, it is not even out yet. They are taking a blurb from a marketing guy at a publishing house who has probably never met the author and a very short video that simply asks a few questions (but provides no answers) and holding them up as proof.
I HAVE READ THE BOOK!
As a book seller I received an advanced pre-pub review copy. The author does go in the direction that this well known preacher claims. But, he once again does it to cause us to ask serious questions, to dig deep and wrestle with our beliefs. The author then lands on what I consider solid orthodox ground (though I'm sure the well known preachers legions of minions will disagree).
I wanted to wait until I could do a proper review of the book to do it justice, but I guess I'll just post verbatim where he lands so every one who cares to read what he actually says can. (note the author works through this at length and I highly suggest you get a copy of the book when it is out and judge for yourself)
First he articulates what ALMOST seems to be a universalist point of view:

"Could God say to someone truly humbled broken and desperate 'sorry too late?' Many have refused to accept the scenario in which somebody is pounding on the door apologizing, repenting, and asking God to be let in only to hear God say through the key hole 'Doors locked, sorry If only you had been here earlier, I could have done something but now its too late."

But he then goes on to give a brief over view of Revelation and focuses on the last few chapters. He lands with this:

"... In speaking of the expansive, extraordinary, infinite love of God there is always the danger of neglecting the very real consequences of God's love. Namely God's desire and intention to see things become everything they were intended to be. For this to unfold, God must say about a number of acts and to those who would continue to do them 'Not here you won't.'
Love demands freedom. We are free to resist, reject, and rebel against God's ways for us. We can have all the hell we want."

I certainly hope all those who saw fit to re-tweet this garbage tweet an apology after they calm down and get a chance to actually read the book.
**P.S. (or a note added afterward) I welcome comments, even thoes which disagree with me. However if you wish to try to convince me of the state of my or my families salvation, call into question my personal theology, or simply try to be rude I will not post your comments.***
Please See also My edits and notes about this post Love wins Redux And for further quotes please see What you look for you will find (or where is heaven?)
Posted by Tom Batterson at 11:03:00 PM 86 comments: Links to this post